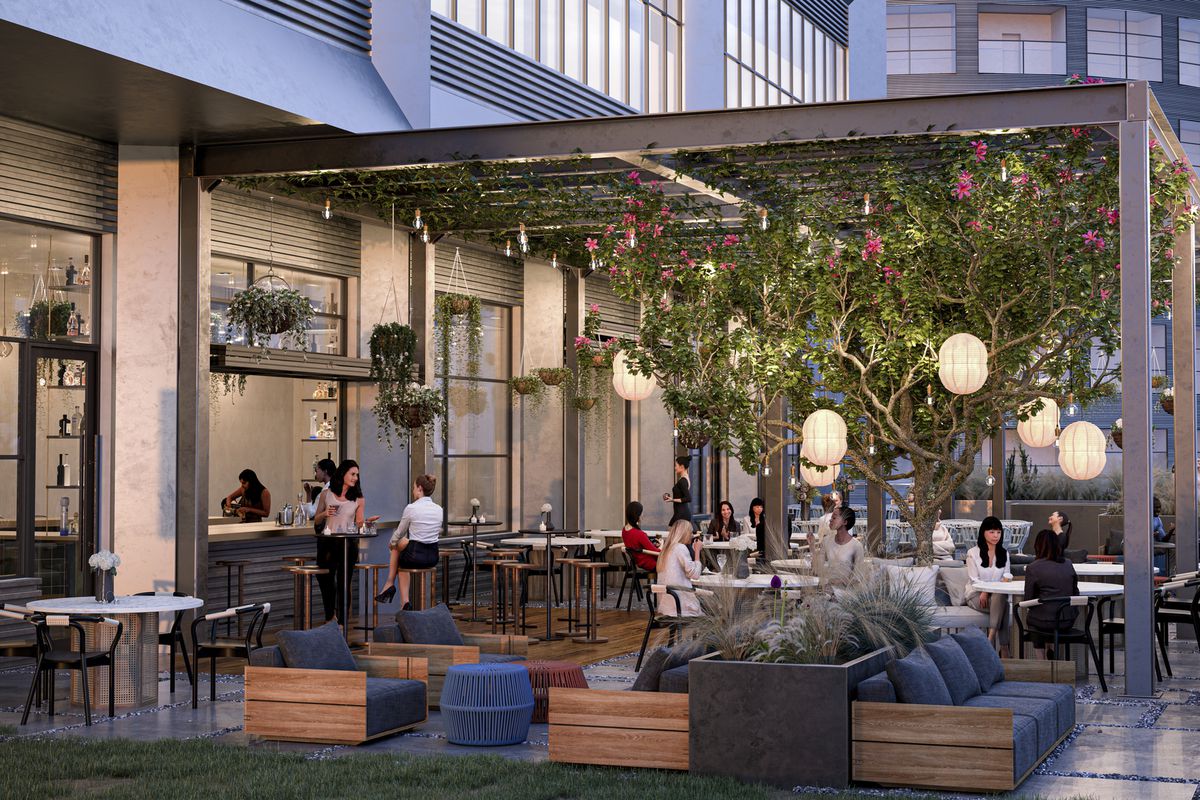 By the sheer amount of construction cranes, the once lonely, postindustrial corridor that is Howell Mill Road looks like a scene from Downtown Dubai at the moment, more or less.

At the center of that activity is a distinctive office project that developers say salutes the district’s past while nodding to the future.

Star Metals Offices is well underway at 1055 Howell Mill Road, with a goal of opening by the end of 2020 and introducing eye-catching architecture to the area, via a series of cantilevers and lush exterior spaces climbing 14 stories.

To lend an idea of the building’s aesthetics, development officials with The Allen Morris Company shared renderings with Curbed Atlanta this week of Star Metals Offices’s planned amenities level exteriors and interior and the lobby.

The spaces, designed by the local Square Feet Studio firm, are meant to be “iconic but approachable, incorporating industrial elements representative of the Westside’s history, such as poured concrete and steel, but softened with luxurious fabrics, leather and woods, all to create a timeless effect,” reads an official description.

Higher in the Oppenheim Architecture-designed building will be a 10,000-square-foot amenity level on the seventh floor with an aesthetic that’s anything but cold.

It’ll feature an outdoor terrace for tenant collaborations and special events (where the bar and catering kitchen come in), plus a conference room, boardroom, and covered outdoor seating, per officials.

Star Metals Offices has signed an anchor tenant in coworking company Spaces, which will claim the building’s seventh and eighth floors and a ground-floor reception area fronting Howell Mill.

The vision for a modular-style hotel stack next to Star Metals Offices, looking south. This rendering: Star Metals Atlanta

Ditto for the rooftop restaurant and bar component, which is expected to capitalize on panoramic views that stretch from downtown to Buckhead.

“We’re currently in discussions with a handful of best-in-class, chef-driven operators for the rooftop,” Morris wrote in an email, “but because of the ongoing negotiations, [we] cannot discuss any details.”

All told, Star Metals Atlanta is redeveloping almost 5 acres on either side of Howell Mill. Across the street from the offices, a luxury rental community is taking shape that’s expected to deliver 409 apartments in July 2020.

Meanwhile, alongside the office building, the 166-room Star Metals Hotel is now expected to break ground next year, officials said.

The new district joins a groundswell of development activity along the Howell Mill Road corridor and in surrounding blocks.